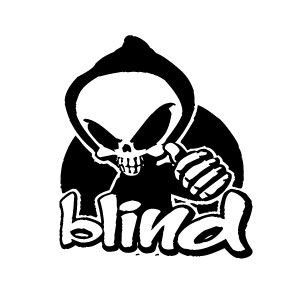 …is a skateboard company founded by Mark Gonzales in 1989 under Steve Rocco’s World Industries distribution company. Gonz has since left the company and today the company continues under the ownership of Dwindle Distribution.

The name “Blind” was devised as a slight to Gonzales’ former sponsor, Vision . In 1989, Jason Lee moved to Blind from World Industries as its second professional rider. Blind signed Rudy Johnson and Guy Mariano from Powell Peralta, and Jordan Richter. Danny Way rode for the company for a short while with a signature skateboard deck, featuring a pink-coloured car.

Blind released its first video in 1991, entitled Video Days, with full-length sections from Gonz, Guy Mariano, Jordan Richter, Jason Lee, and Rudy Johnson. The video was filmed and directed by Spike Jonze and is undoubtedly one of the most influential skateboarding videos of its time.

While filming a second video, Plan B director, Mike Ternasky reviewed progress footage and realised that Tim Gavin and Henry Sanchez, members of the Blind team, were the only two riders who had footage worthy of a high enough quality. The release of “Pack of Lies” followed in 1992.