This is the first of a series of interviews we’re running with shop regulars and Kent locals. There’s so many people involved in skating now with an almost ‘hidden past’, guys you might see struggling to do a rock’n’roll at the local park, but you’ve got no idea, 20 years ago they were the man! That’s one of the best things about skating, many of the forefathers and pioneers are still around today and a lot are even still skating. You can learn a lot from these guys and they deserve some respect.

A name I wasn’t aware of till recently was Mark Slough but he is one such ‘old guy’ with plenty of living history to share!

SP: Starting on a local subject, you grew up skating in London but later moved to Thanet right?

MS: I moved to Thanet in 84, been here ever since. I love London but prefer it here now.

SP: From my understanding you were one of the original Southbank locals in the 70’s and went on to be sponsored by G&S in the early days?

MS: Yeah I started skating Southbank in 77, got spotted there by Pacer skateboards (then Gecko). My later sponsors were G&S, Norcon safety equipment, ACS trucks, Vans and Yo Yo wheels.

SP: That’s a pretty impressive sponsor portfolio, where there any guys that you were team mates with that kept going onto bigger and better things?

MS: I think Shane Rouse carried on freestyling for a while, Danny Webster wasn’t in the team at the time but used to skate with us, he did well in the skate world.

(Shane did carry on freestyling and was later involved in UK mag ‘Skate Action’. Webster turned pro for G&S and headed off to the States doing well on the pro vert circuit but more on that another time)

MS: Not really, mostly repping the company’s goods, ie if a new board came out you would get the prototype to use in comps and demo’s, I was sent to the states a couple of times, Paris, Holland etc just to get the product out there, at the time it wasn’t unusual to get a couple of hundred people at major events so I guess it was worth it for the sponsors.

SP: Didn’t you also win a big freestyle comp where the first prize was a trip to the States?

MS: No, Pacer originally sponsored me to go to the Oceanside pro-am in California,after that we hooked up with G&S and things went on from there. The comp you’re thinking of was the British open in 79 where I placed 1st in the freestyle event. I was a freestyler first and vert rider second but couldn’t slalom for shit!

SP: Downhill and slalom seem to have had a real resurgence in the past few years, it was looking like a dying art for a while.

MS: Yeah slaloms making a big comeback, i guess it’s the next step for bored long boarders! The guy’s in London are still mad for it, Rob Ashby, Jim Slater and the like, I remember Jim and Tim Panting slaloming at the Southbank in the 70s drawing massive crowds. I think vert riding’s going to go the same way, once people progress from the more mellow bowls. 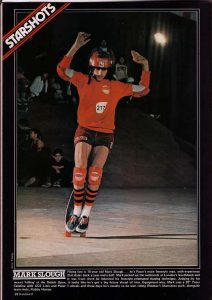 SP: Were the early US trips where your love of classic American cars came from?

MS: Yeah, I guess seeing all those 70s cadillacs and other cars out there must have had some influence!

SP: Is that yours that you come up the shop in?

MS: No that was my mate Petes, I sold my Pontiac to a guy in new Zealand last year, first time without an American car in over 10 years, looking for a replacement though.

SP: How many have you owned then? What’s next?

MS: Gotta be in double figures by now, probably looking for a Firebird this time had a V6 one before but wouldn’t mind a V8 one this time.

SP: Nice, but I digress, back to skating! Do you remember why you started skating in the first place, was it just because it was the big fad at the time?

MS: Started because it was something new and different. At the time I didn’t know of anyone else who was into it.

SP: So you weren’t part of the whole ‘craze’ generation then? And the first other skaters you got to know were at Southbank?

MS: Yeah, used to go there on me todd to begin with then with other friends as it became more popular. Southbank first, then Skate City was built which I guess was the start of the skatepark revolution.

SP: And when skating ‘died’ you thought that was that and then moved onto other things or you just naturally outgrew it at that time?

MS: I gave up skating because of peer pressure, it looked like skating was dying out and my parents thought it was best to get a proper job!

I gave up skating late 79, before the ollie even arrived here. So like the slalom. ..I can’t ollie for shit either!!!! 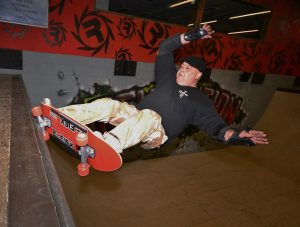 SP: I think I was first aware of you when I saw the Southbank re-union thing fairly recently. Ben that works here showed me the article and said you were his old school caretaker! Is that right it was the first time you’d properly set foot on the board since the 70’s?

MS: I was actually the gardener at Ursuline College when Ben was a pupil there, 17 or so years ago now! I gave skating a bit of another go when Revolution Skatepark first opened but busted a couple of ribs on the 2nd visit! Even the nuns at the College took the piss when they found out I’d done it skateboarding!

SP: And you’re back skating now?

MS: I started again when I turned 50 at the Southbank reunion.

SP: Do you regret being out of it for so long? During our few meetings I’ve always sensed you have a genuine love of it?

MS: Yeah I really regret giving up skating back then and often think of how my life could of been but it was good to be a part of something at the beginning when almost every trick was new and exciting.

SP: When you weren’t skating I assume you weren’t paying much attention to what was going on?

MS: To be honest, I didn’t really follow what was going on in the skate scene at all after I gave up. I guess I tried to move on from it but as most skaters of my age will probably say “once a skater, always a skater”. Bit corny but true, it’s part of who we are. Just because we might not be able to do everything we used to doesn’t mean we’re still not rad fuckers!

SP: So to round it off do you have any words of advice or wisdom for the younger generation of skaters?

MS: That’s probably the toughest question yet, but nah, sorry mate, no wisdom here at the moment!

SP: Thanks for your time Mark, I always enjoy a good skate history lesson.

MS: It’s been good to chat about it all to be honest, brought back some good memories!