So firstly can you tell us how you got into skating and where you started?

I can’t remember what year it was but I was still at junior school, so must have been around 1974, I was introduced by a friend back then Graham (Gunny) Gunn. We made our own boards from old plywood, old roller skates with rubber wheels. These boards were total shit but there was nowhere to buy anything back then. The first shop to sell anything was John Browns Sports, that used to be at the bottom of Margate High Street. I remember the old wheels with open bearings and cones inside could be a nightmare when ball bearings spilled out and you came to a abrupt stop. We used to skate the downhill slope at Westbrook Beach, I remember Paul Emin (Emu) from back then , must have been about 15 of us who went there daily.

Sounds like carefree fun times, so you guys were just bombing hills and doing slalom and stuff?

Yes we used to find anywhere we could bomb down no pads, one summer full of scabs.

So the early skate scene round here seemed centred around Hartsdown, I’m assuming you remember the ‘skatepark’ being opened?

The next year the council built some indoor ramps which were placed inside one of the old buildings in Hartsdown park. This was then quickly followed by the old grass banks which the park now stands on, being Tarmac  covered,which they soon realised was not adequate and then concreted over. It was always packed down there,the floor area was a lot smoother than now. I remember Mark Heaton (Skate Pharm web guru/photographer) from there too.

I’ve also heard talk of an indoor park in Herne Bay but no one seems to be able to remember the name! (It’s now the headquarters of Wahl who make hair clippers and stuff, they recently had a warehouse sort out and uncovered a Benji Boards mural which is how I came to know of it):

Herne bay skatepark was in a old warehouse on the outskirts, it had a great big half pipe made of ply and fibreglass,no flat bottom and the top part used to flex,it must have had about 8ft of vert !!!! There was also a snake run made of a slope down to a quarter pipe then opposite each other 5 in total I think, then there was a slope down to a slalom run, the whole place was a bit sketchy,,,lol

So after the attraction of Hartsdown wore off you started traveling further afield and skating places like Gillingham?

We used to go and skate Skate City , Mad Dog bowl , and my favourite Rolling Thunder. Thunder was so well ahead of its time, how our parents ever let us go there on our own at such a young age is beyond me !!!!
So many names from back then that are still about now (Rodga Harvey, Nick Sable, Floater, Sablosky)

Gillingham then opened, great to have something a bit closer, we went the first day it opened, what a park we spent many great summers there. 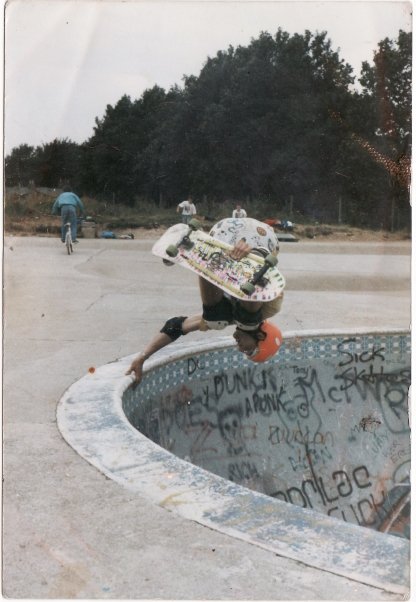 What a great park though, I remember going there the first day it opened , so well thought out, it used to have grass between everything ( which was soon concreted over ) Shogo Kubo did visit there, I was there a young Lance Mountain turned up,( he ripped at this early age) a lot of people that still skate now all skated Gillingham back in the day , Billy Smith (ex G&S pro) always ripped there.

I also understand you later funded building a vert ramp there which the council fairly swiftly removed, how did all that come about?

The first mini ramp we built was on the old Queens site near Franks nightclub in Cliftonville. We had been skating Gillingham for years and was about 88’ish, the popularity of ramp skating had taken hold and we (Ken Bishop, Tat, Dave Peake, Paul Carter, Matty Richardson) went all over the country to different comps – Crystal Palace, Warrington, Brighton, Swansea etc. We decided we wanted one in Thanet!!! Between us we chipped in and got some ply to make the transitions, then we all drifted apart.

The transitions were stored in my basement (in the infamous party house behind the police station) well it was still in my mind we wanted one, there was some building work going on down the road from me and all these 4” x 2 lengths were just there. We decided we needed 30 of these, so over a period of two weeks we slowly “BORROWED” the amount we needed. These were all transported by hand to the site where we built the framework, we ‘found’ ply too. We had a great summers skating and the improvement by us all was astounding, at the end of the summer they started work on the housing complex,so bye bye mini!! 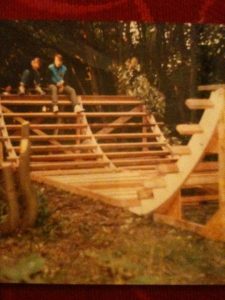 Spring arrived and so did a new mini ramp, this time on the old disused railway line at Tivoli. This was a great scene, we had a few old sofas and we were far enough from houses ,so we could make as much noise as we liked! We had bbq’s every weekend ( with burgers and rolls all borrowed from my work !!!! ) This was one mental summer , music, skating and loads to drink , it always descended it to the normal skating debauchery. The ramp started as a mini, again we borrowed wood,and the ones which were working put in for a decent ply surface. At this stage we thought we were the kings of skating, to be honest we could now turn up most places and be well above the normal. Most weekends there would be around 20 of us there plus people from Canterbury, Dover etc. We hired a generator and lights one weekend and had a comp, Fids ruled it as usual.

All this was going on while we were petitioning for a vert ramp in Hartsdown Park, we spent about 4 years constant pushing, meetings etc. They didn’t even have to put their hand in theIr pockets, all they had to do was give us some land!! Well, after petitions and newspaper/tv coverage they finally gave in.

How long did the vert ramp last and why did it end so badly? 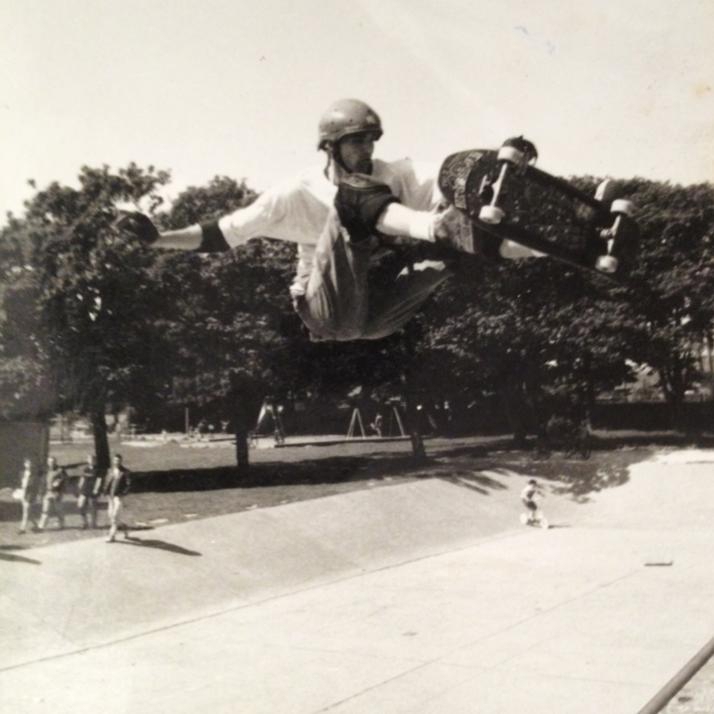 The vert ramp lasted 6/7 weeks ,they did a stealth mission at 6 in the morn (just like Little Oasis) first thing I heard was at 9.30 to be told it was gone, no warning, nothing. It later turns out the local residents had a petition of 13 names to get rid of it ( one of the councillors family lived opposite it and wanted it gone ).

So where else did you guys skate around that time?

We skated Buckmoor Park a few times but it was pretty crap even then. Dover Crabble Park ( Banks at the end of a tennis court ) the banks at the playground in Jennifer gardens Millmead. We used to skate behind Gateways in Margate , we had a spine ramp made from the old ramps which we salvaged from the Council’s old indoor 70’s park and a long grind/ slide pipe , this placed was heavily used. We even built a few quarters and used them as well, we had one big street comp there ( people from all over Kent came ) and we had a 4 page spread in R.A.D magazine. Mill lane was heavily skated by the street skaters at the time. (Richard Pitman, Lee Skiggs, Neil Brown, Jimmy, James, Mark Gibson,)

Sounds like you guys pretty much created your own skate scene and just made stuff happen. Do you feel like modern skaters have it pretty easy? Do you think that what you went through made you guys pretty tight as a crew, I mean you’re all still good friends now right? 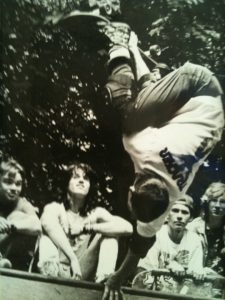 We had a great scene, always off somewhere on the first train out of Margate on a sat morn. And not getting back untill midnight, then doing the the same on a Sunday, the modern skaters have it so easy! They moan about having to possibly travel 5 miles max to skate, we would travel hundreds to skate, we all still get together and it’s like we have never been apart.

So what happened next?

I know I drifted in and out of skating, due to new relationships, partying,and it losing popularity and having no shops or places to skate,

It seems sad that such a strong scene died out, sounds like it was largely due to the actions of the council too, like that was the turning point when people starting to be a bit over it?

The council definitely did not help, after it was removed we decided to take it back and rebuild it on the old Tivoli site where one of the old original ramps had been, we built it in a cut down form 8ft high . Yet again the council got wind of it and it only lasted a few weeks (the old ramps had stayed there for 2 years) It’s like the just didn’t want us to have anything to skate, this time they removed it and smashed it up!! This finally put the nail in the coffin, the local scene fell apart , some of street lot still got together at Mill Lane (more on that another time) but really that was then end of an era for me and a lot of the other guys.

And I guess the scene kind of laid dormant a bit until Revolution skatepark opened about 15 years ago, seems like that kickstarted a lot of the old guys skating again? 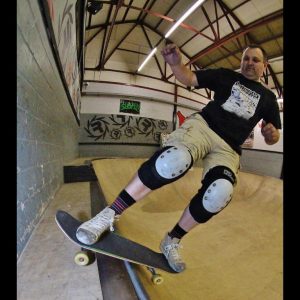 Revolution opened and everybody was stoked by it , we all came back out the woodwork. Most of the old boys really started again when the old boys special night was first done , so many of us all turned up, was great to see all the old Canterbury, Dover, Gillingham boys. I think we had more of a scene back in the day, as we all knew each other and we would all go everywhere together, I remember ALL of us going to Romford for a Powell demo and it had to be called off due to too many people turning up (2000 if I remember rightly). Nathan got arrested for inciting a riot, trying to turn the police vans over and I had to bail him out as his parents were in Scotland! We always had such adventures back then, today the kids don’t want to do much they want everything provided for them, bloody technology has destroyed a lot of self made fun!