by nic powley on February 9, 2015 in General Interest, Team 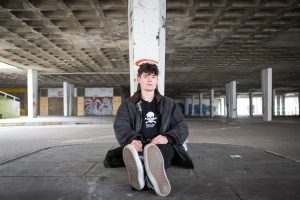 SP: Sam, you’ve were killing it in Skate Pharm territory for your welcome edit. How was? The cold/wet weather make it hard work?

SM: Killing it may be an over statement but yeah, it was a rad few days at the seaside and I’m stoked with the finished product despite a few mishaps along the way. I really hate the cold when trying to skate, it seems like it takes forever for your body to warm up and to be able to feel your feet. Saying that, it’s always good when you make your trick at an ungodly hour in minus temperatures knowing you can sleep easy and haven’t been sitting on the sofa all day.

SP: Are you planning to come down more often to Margate?

SM: For sure, when the weather is a bit warmer and once Cates has got his shit together and built his backyard pool !

SP: Did you enjoy the local spots in Margate? What was your favourite spot?

SM: Yeah, I was proper surprised at the amount of spots you guys have got down there, they’d just seem to pop out of nowhere ! I liked the 4 up 4 down Bandstand in Ramsgate, right on the coast with some good views and not too many crackheads in sight. 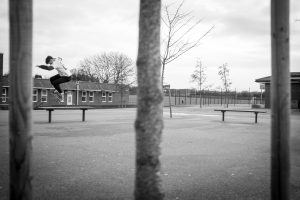 SP: You were meant to film your welcome clip a while ago but broke your leg, how was it getting back on your board after such an immobilising injury?

SM: Being able to skate again properly is crazy for me, I snapped my fibula and broke my ankle in 4 places. Had three surgery’s and a load of metal work put in and the doctors were telling me it may never fully recover as I’d fractured the same ankle twice before. Having that thought of never being able to skate properly again sucked, it really got to me if I’m honest cause it takes up such a huge chunk of my life ! Had about 6 months out before easing my way back into it, and my leg/ankle slowly strengthened up until now were I’d say it’s almost fully healed. Being comfortable on a board again just puts a grin on my face ear to ear.

SP: If you don’t mind me asking how did it happen?

SM: Was filming a line at XC for my welcome to Death Skateboards section and fucked it basically ha ! Was doing a 360 flip over the driveway and caught it weird so kicked the board out and just landed straight back on it. Slipped out with my back foot on the floor and just sat on my leg at some crazy angle. I felt the bone snap so I knew what I’d done then and there.

SP: What did you do with yourself when you weren’t skating for a few months?

SM: Just worked at my 9-5 as it was a desk job, played a lot of guitar and hung out with my girlfriend really. Has been a pretty mellow year…

SP: You got on Death and were announced as an AM before summer last year, how did that come about?

SM: I met Zorlac first at a Pioneer comp in 2012, was fanning out and just desperate to talk to him really aha ! I mentioned I’d been filming a few clips with my buddy Tom and he said to email them over, so I did, he liked it and we had a few 2am sessions at the Unit mini ramp (R.I.P) and it went from there ! Nick asked if I was keen to be AM for Death and it was a no brainer, so here we are.

SP: I’ve heard that on a trip with some of the Death guys, you managed to get locked in the apartment you hadbecause you were in the toilet?

SM:Haha well me, cates, Mikey, Felix were in Skegness staying in this B&B for the mini ramp champs, I went to toilet and heard everybody leaving and the door opening but I was mid shit so it didn’t seem like I could do anything about it. Then I realised they locked the front door and nobody is answering their phones so I thought I was gonna be in there the whole damn night on my own, I contemplated going out the window onto the roof but it looked way to sketchy. They thought I’d already gone out or something I guess, managed to get hold of them anyways and they let me out !

SP: Do you ride for anyone else at the moment?

SM: I also ride for Dang Shades UK who hook it up.

SP: Right moving on from your skate stats, where do you reside?

SM: I was living with my paps still in Berkhamsted, it’s a small town about a half hour train journey north of London. But I have just moved into the House of Doom though which I’m really looking forward to skating the ramp there in the summer! 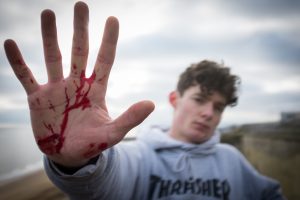 SP: Your recent Skate Pharm playlist was pretty interesting, I especially liked the use of Black Sabbath and Chaka Chan in succession. What was the last thing you listened to today?

SM: Ummm last thing I listened to was “Milk and Honey – Arcade Fire”

SP: Have you got anything big planned for 2015? Any trips?

SM: Umm no massive plans for this year really, just moved into the Death house so that’ll be sweet. Other than that, just progress my skating, go on some trips to film for the new Death video and probably try to go back to L.A or Asia at some point.

SP: Any shout outs before you go?

SM: Thanks to the Skate Pharm fam, big ups to Zorlac and Death for everything ! Dang shades, Tom Frimley, XC staff for always being sound. All the local skaters, BAC (Brown and Curly) ! My parents, the Mrs and anybody else I haven’t mentioned.