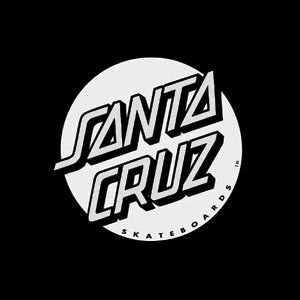 Santa Cruz Skateboards officially launched in 1973 although the founders had been selling skateboards out the back of their cars for a few years before that. Early team riders included legends Duane Peters and Steve Olson who got the first ever pro board on the brand. They are the longest running manufacturer of skateboards in existence today.

Santa Cruz grew into one of the leading brands of the 80’s, alongside Powell they pioneered the introduction of the skate vid into our culture. Their first two videos ‘Wheels of Fire’ and ‘Streets on Fire’ became instant classics and made worldwide superstars of their team including Jeff Grosso, Jason Jessee, Natas Kaupas, Jeff Kendall, Eric Dressen, Rob Roskopp

The screaming hand logo was also introduced in 1973 by Jim Phillips apparently inspired by a creative block. He also produced some of the most iconic skateboard graphics of the 80’s, think Jason Jessee Neptune, Rob Roskopp face, Jeff Grosso Toybox, Jason Jessee Sungod and on and on. These days art direction duties at the brand are handled by Snr’s son Jimbo Phillips.

Today they have an impressive legends team and often re-release many of their classic models for all the nostalgia freaks and collectors. They also have a solid team of modern talent consisting of Shuriken Shannon, Emmanuel Guzman, Juston Strubing, Sid Melvin, Tom Asta and Josh Borden.

As far as brands with history go, you’d be hard pushed to beat Santa Cruz!