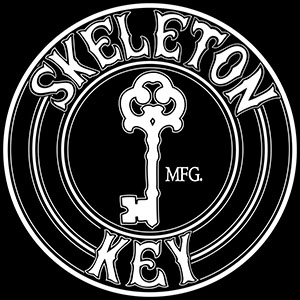 Skeleton Key Mfg is basically an anti-company started by Creature pro and owner Darren Navarrette. Like all the best brands, it started as a laugh, run out of Darren’s kitchen by a group of mates. I doubt there was much of a marketing plan but before you knew it the had a ‘team’ including PLG, Zach Miller (son of Chris Miller), Alex Perelson and England’s own Dave Allen and Sam Beckett. Most of these guys were just phoned up and told they were riding for Skeleton Key, they didn’t have much choice in it but they were stoked anyway!

Contractual promises consisted of: “We’ll pay you nothing but you’ll get some shirts and stickers”. Because it came out of the vert scene it stayed under the radar for a while despite all the raddest U-pipe riders in the world wearing the gear. It says a lot about a brand when guys at the top of their game want to wear your stuff for free!