Dan was the first or second guy to join the Skate Pharm team, since then, he’s moved from his long time home in the notorious Death house in Harrow to become a Margate native. He can now be found most afternoons in the shop on the way home from work, drinking all our tea, eating all our biscuits, occasionally turning up with random cakes and generally annoying the hell out of us!

So firstly what prompted your relocation to Margate of all places?

I always wanted to live by the sea and over the last few years I kind of fell in love with the Kent coast, this feeling pretty much coincided with me falling out of love with London. The rest is history.

When you moved you were pretty stressed about finding work but you landed a job at a pretty nice golf course by the sounds of it, how’s that? 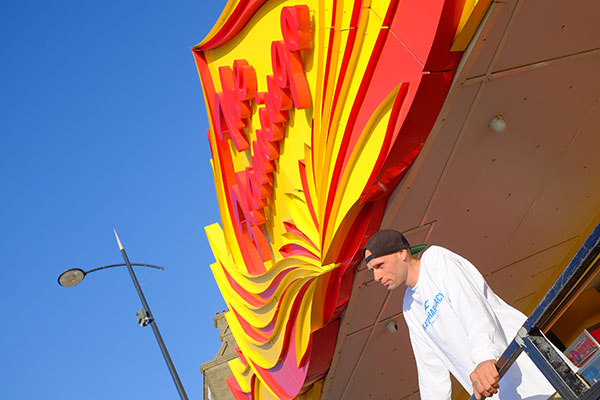 As I had anticipated, it ended up being a slightly unnerving experience for me when I first got to margate, because I had managed to buy a house, but didn’t have a full time wage in order to pay the mortgage (skateboarding doesn’t pay very much). I was pretty sure I would find a job doing what I originally trained as, which is a golf course greenkeeper, but I also knew that I was going to have to wait it out until the spring when the golf industry starts to hire again. So as you can imagine, I was sweating it a little bit, but I needn’t have worried as I ended up getting two offers in the same week from local golf courses once the spring rolled around. It’s great to be back on the greens and the people I work with are all really good guys. My life is a little different now in comparison to the glorious days of my youth but Margate is a brilliant place to be and I live just 3 blocks from the beach now. My girlfriend also absolutely loves being here too and she is constantly telling me that we are “living the dream”.

And you never told them about being a skater? how is it now they know you’re superstar pro skateboarder?

Superstar pro skateboarder is a rather generous title don’t you think?

Yeah probably, it was for comedic effect…..

I didn’t really feel it was necessary to mention anything about skateboarding to the guys at work, that is until after about 6 months of working there it transpired that my boss happens to be friends with Mark Slough (who was a pro skateboarder in the seventies from Kent.) My boss never skated but he used to BMX a little bit and seemed totally blown away when 1 started to explain my background in skateboarding. I seem to have actually shot right up in their estimations since telling the guys that I skate, which is pretty unbelievable as usually it’s the total opposite.

So what’s the best things to do in Margate when you’re not working or skating?

Well my suggestions would be as follows:
From my place you can take a 5 minute walk to the beach, stopping at ‘Crusty’s’ on the way to pick up a toffee slice and a Gypsy tart. You can take a short walk up the beach for a quick dip in the Victorian sea bathing pool, then you can dry off over a cream tea on the veranda at the Walpole Bay hotel. Next you can walk along the beach to the Turner gallery where you can check out their latest show for free. When you come out you can either get a £5.00 seafood platter from Manning’s, or head to ‘the lifeboat’ in the old town for their highly recommended Kentish sausage and mash, wash that down with a half of Kentish forager berry cider and relax by the open fire (if it’s winter). If you are still thirsty you can head to ‘the Harbour Arms’ for some rhubarb cider and amazing views across the harbour before heading to ‘Dreamland‘ for a ride on ‘The Scenic Railway’ and some vintage arcades. If you still want more, you can walk along the sea front to Westgate and watch a movie for £2.50 at the old Carlton cinema before having dinner at Paul’s cafe and bar. Be sure to order the chilli burger with sweet potato fries.

Spudman is for sure the most entertaining, but he seriously needs to work on his manners!

How often do your feelings get hurt when you visit the shop?

I don’t have any feelings

How is it filming with our in-house filmer Biscuits and when’s the next Death video due out? 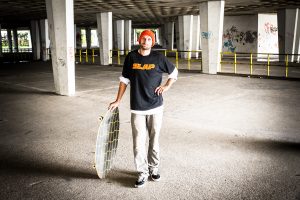 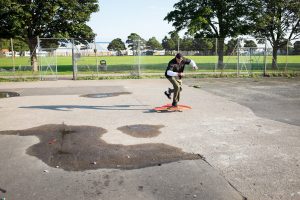 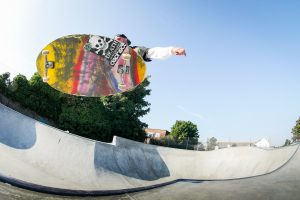 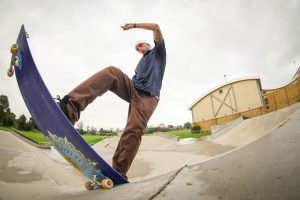 One of the funnest things this summer was filming that Surfing clip for the Sidewalk Dew Store Wars comp. I know you had your doubts about the potential success of that, were you surprised how well it worked out and how hard was it to stay on?

That was such a highlight for me! It was something I had thought about many times, but never quite figured out or got around to attempting. It was actually you that ended up making it happen. You seemed to know exactly what to do and how it would work, as if you’d been thinking about trying it for a long time too. When it worked perfectly on the first attempt I just wanted more! Basically two total dickheads managed to reinvent surfing in a single afternoon in a town where there isn’t even any surf. Outstanding work if I say it myself. “Skurf and Destroy homeboy”.

I cycle past that ramp a few times a week at least and I always thought about doing it, I guess I’d subconsciously already worked it out, it only took me about half an hour in The Surgery to build the rig to do it. When you moved down also coinciding with Store Wars I knew you’d do a better job of riding it than me, I would have killed myself, I would no way have gone at it the speed you did so it wouldn’t have worked as well. I don’t think the footage does justice of how fast it was, I was actually sh*tting myself you were going to f*ck yourself up, it was a real relief when it worked out straight away.

You’re pretty obsessed with your Insta followers, can you explain the origins of butt weekend and also why on earth people unfollow you as a result?

I have never been a fan of social media, but once I got an iphone I quickly started to realise the significance of Instagram. I see it like this: When I was a kid, if a skater got an ‘intro’ in R.A.D magazine he was literally a made man, that’s how much weight the mags carried then. Now, 25 years on, the future of what for years has served as a lifeline for skateboarders the world over, is extremely uncertain with Sidewalk and Kingpin sadly no longer in print, and even some of the American mags in far shorter supply. As a sponsored skateboarder you have a means of instant self publishing at your finger tips with Instagram and you can continue to share what you are doing with the skate community on a daily basis through it. It’s simple: the more interesting stuff you post, the more people that will follow you, the more people that follow you, the more skaters you are connected with. I think sharing moments in time with other skaters across the world has got to be a really positive thing, as of course is butt appreciation obviously. One word of advice though, you probably shouldn’t follow my instagram if you don’t like girls bums, or skateboarding. Butt weekend for life!

If you do happen to like Skateboarding and female butts you can follow @therealdancates and possibly regret it for the rest of your life. #buttweekend