Photo: Here we see an artist’s impression of what French’s jazzy Australian art show launch party might look like with all his new mates and his taste for the amber nectar.

So firstly can you explain the circumstances that lead you to end up in Australia for an indefinite amount of time?

My wife got offered a job in Melbourne so we decided to move, seemed like a better option than living in Walthamstow any longer.

Are you moving about a bit or just staying put?

What’s going on with Witchcraft while you’re away?

Its carrying on as usual, Alex Irvine holds it down in the UK, Rock Solid carry on selling it and the internet makes it really easy to communicate with everyone.

Anything interesting in the pipeline that we should keep an eye out for?

I’m working on a poster for an Irish short Horror Movie and titles at the moment and also working in some stuff for Alex Irvine’s new wheel brand “CAR13”. I’ve got a solo exhibition in Sydney in March so I’m hard at it for that and I’m also meant to be working on a board for Eric Dressen for Santa Cruz, but thats really in the early stages at the moment.

So I’m guessing you’re also partaking in plenty of skateboarding while you’re away too? Where’s the best stuff you’ve skated?

Yeah I skate pretty much every day, I dunno what the best thing is? I think I skate Fitzy bowl with my friend Dave Quirk the most, but thats just cos its so close to my house. The new Noble Park skate park in Melbourne is pretty sick, my friends garden in Adelaide is sick, all DIY and super tight. I also really like the curbs in Docklands. I think just the fact the weather is so good you can skate everyday is the best part of it here.

Couldn’t think of any better way to round this off than some stupid stereotypical questions about Oz: 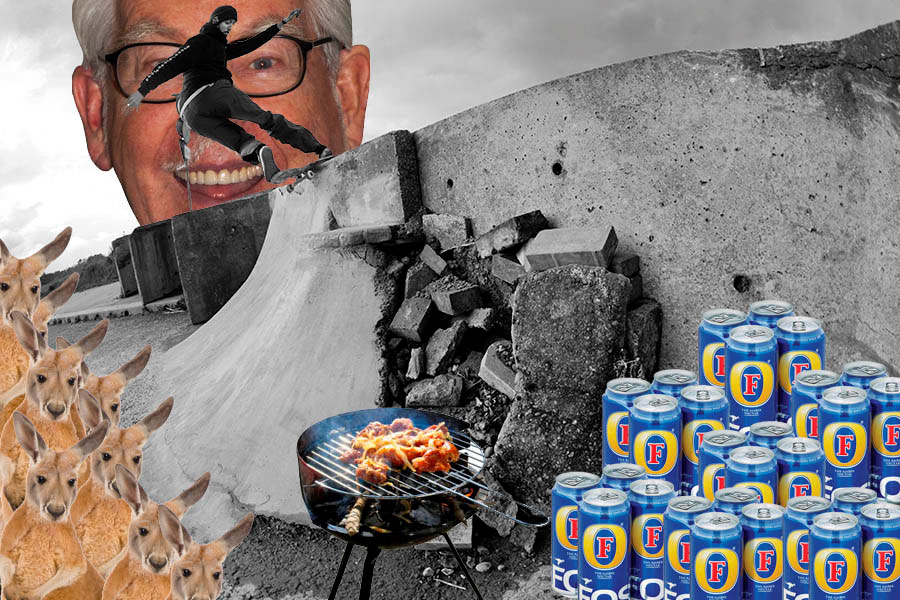 This photo was taken by Rich Gilligan in rainy old Essex a few years back but due to our amazing photoshop skills we’ve been able to make it look like it was done in Melbourne. Look at that naughty Rolf Harris looking on, probably hoping French takes a slam and exposes his bottom no doubt.

Worst 3 things about Australia?
Backpackers, Racism and the price of beer!

Roughly how many barbecues do you attend per week?
Actually I don’t think I’ve been to that many.

Have you been to the national shrine dedicated to Rolf Harris?
Is it next to the one that says that the Australian’s invented the washing line?

How many shark attacks have you been a victim of or at least witnessed?
So many but there’s more snakes at parks, if you get what I mean?

In fact how many animals in general have tried to kill you?
None, but my friend Loui had funnel web spider on his back at the party the other night, that’ll f*ckin kill ya.

How is Alf, is everything ok at the Summer Bay surf club?
You know I was in Home and Away in 2007 right?

Thanks for your time mate and for taking this highly intellectual interview so seriously. Check out French’s work at funeralfrench.com and everything Witchcraft related at witchcrafthardware.com